If nothing else, getting achievements means I am doing something sort of productive in wow. Not majorly productive – like gearing, or getting a something really rare; but I am getting somewhere. 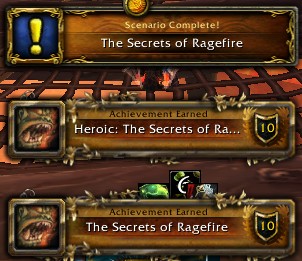 I’ve only done a handful of heroic scenarios and the Dark Heart was pretty tough all told. I joined the team and found that it needed all my concentration to keep alive and swinging. Yes, heroic scenarios are actually challenging. That is good. Bring them on. 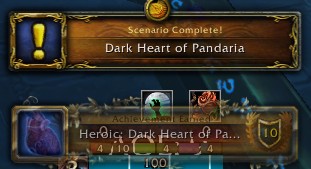 There is a stack of new material to read for patch 5.4, and what I’m reading at the moment makes me think that it will be a good patch. Why? Because a lot of the material is further along that what we saw with the early v5 patches, which means I think I am getting a better view of things to come.

My highlights so far are:

Lastly we have the Death Knight new Tier bonuses…

For Blood I can see DRW being a bloody awesome Boom tool. It becomes a burst effect for either recovery or threat/dps. I really like that idea. The 4x set is also clever in terms of quality of life improvement where Tanks need to think about refreshing Bone Shield less.

For DPS the 4x set looks nice in terms of boosting dps on use, which is better than the current 4x set which I think is situationally great or average. Not sure on 2x set as yet.

I played the new content released in the WoW patch 5.3 last night, and here are a few observations (also here is Wowheads guide – which is darn handy).

Overall: Great to see new lore. Excited to have two new scenarios, specific quests to advance the story, and an experience across both the old world and Pandaria. Great too that the legendary quest keeps rolling, and I cannot wait (but will take months and months) to get the high level cloak.

Whatever comes in 5.4 will hopefully still value that cloak’s ilevel 600. Otherwise it seems a short term reward. Or imagine what the next jump after 600 will be, and how that will devalue all other gear for the patch.

But … no way in hell I’m doing the “gather 150×4 materials” every bloody week. I started the quest yesterday, and it took hours and hours to progress through it. I’ve got around 450 of the 600 drops needed, and I’m already really bored with doing the same four tasks:

Dull, dull, double-dull is all I can say about this weekly quest.

I’ve already read comments from other players saying they’ll do this quest twice and then never again. My advice is to do this now while people still want the pet and the few other odd rewards so that you gain the advantage of big groups killing those NPCs. It is a blisteringly stupid move to create such a grind.

But apparently it is great for alts, as they can gear up this way? FFS no. Each weekly grants a 489 item when better rewards are in the new heroic scenarios, but only if you have also looted one of the special drops too. Derp.

Otherwise the scenarios and new quests are great. Fast, easy on normal, and fun to blow through. I get the impression that after a few times I’ll recognise all the lore elements and begin to get tired of them, but for now it is something new to play through. My last task is to get the end of the “help the lost old hermit” chain, for the boots, and then that will be all the lore done. A few nights and the content is “encountered”.

Regardless, I hope you’re liking it. TyphoonAndrew.

Patch 5.3 notes are out, for the Prod drop on May 21st. Ref: MMO-Champion – Patch 5.3 Live This Week for a full summary. I expect downtime to be bigish, with the downloader churning away. This means the cycle is less than three months between patches, and if the next patch comes quickly we might see a staggeringly fast end to the Pandaria story-lines. Blizzard’s website also has a nice prep summary.

I’m pondering the amount of ilevel 500+ gear which is being made available in one time rewards, and perhaps it is time to consider the offset as a priority.

A few highlights for me are:

Overall I’m looking forward to the 5.3 patch. It is not a huge patch for content, rather is a prep patch. It is a great patch for gearing your toons. The folk who don’t get much are those who are already geared up beyond 522 or higher. Sorry guys, only the cloak for you.

I did not finish collecting the Wrathion tokens from boss kills in patch 5.2, but will get there soon. I also don’t run the downloader often, so I’m going to kick that off before bed tonight.

I read recently that WoW will be concentrating on scenarios rather than 5 mans. It started a pleasing debate over on the wow forums.It is worth a read through.

Quick thought – I think that the only reason people do scenarios and even 5 mans more than a few times is because they reward Valor points. The time/valor point is good, the experience is repetitive in the extreme. I know this is how I play, because as soon as I cap my Valor points each week I stop doing 5 mans and Scenarios.

Not true? So test this by removing the Valor reward from Scenarios and 5 mans for a patch and see how many people do them every day. Just because people are doing the content does not mean it is good, it means it is a means to an end.

(this was interesting from that thread – Sharmarli):

At this point I’m not really doing Scenarios or Heroics.  I have never done heroics this expansion (total of 9 I think when I got drug into guild runs) While I did a large number of scenarios initially to help gear up this Char the only reason I’ve been running since about the end of  November has been for quick valor points.

With the release of 5.2, however, I haven’t even been doing scenarios for the most part.  If I need extra VP I just go and kill the Isle rares for the 15VP books (made 135 VP last night in about 30-40 min of actual play time:  killed 6, went and made dinner, came back and killed 3 more).

Building new content should be an inbuilt part of the expected dev cycle. I know there is less money in the pot then before, but 8.5 million players is still a heck of a lot of players by any stretch of the imagination.

The devs have done great things by giving players more choice on how to earn these points, but we still need them. The old statement that Valor grinding is not “mandatory” is as silly today as it was before, we just have a wider range of ways to perform than grind.

Scenarios can have any combination of toon classes – so um, why not 3x DKs. Reminds me of taking 5x DKs through the Hellfire dungeons as its all we had. Yup, we won. 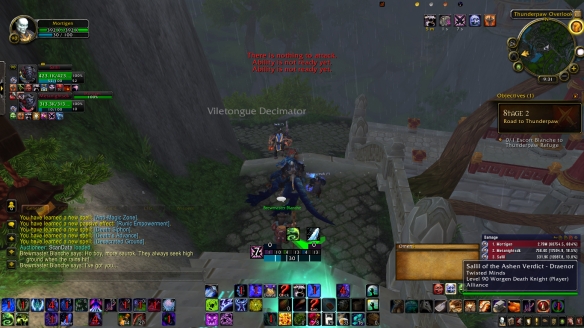 We had an Unholy, Blood, and me as Frost too. Happy Killing.

All material is copyright
TyphoonAndrew's – Eye of the Storm
Create a free website or blog at WordPress.com.