Well behind the curve, and given that the level 80 Death Knights have been running amok for a week or so – the news that my Death Knight is level 70 is not huge for most. But for me its fantastic.

I’m now in Northrend, running quests, killing mobs, and learning how to scale them. I think they are better at 70 than the initial “whoa” you get at 55. The mobs are tougher and take some extra hits, and sometimes a miss or dodge will stuff my rotation; but I love it.

Deathgrip is fantastic for solo play, combine that with two Silence affects when you’re Unholy, and two anti-magic shields – casters are Toast. 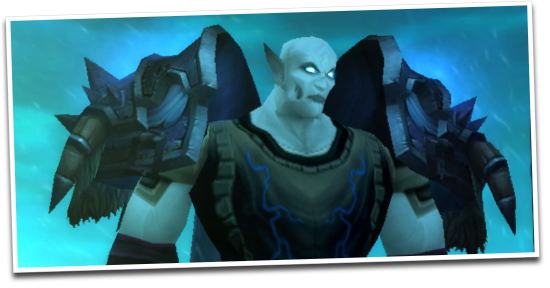 I thought I’d go affliction, but then it occurred to me that most of the day 0-12 specs will be adjusted and tweked, so just play with something fun.

That fun is a full demonology talent build, which puts the Felguard and Subby in as major partners. END_OF_DOCUMENT_TOKEN_TO_BE_REPLACED

Update 4: The infomation here is not current for Cataclysm, as I have not played a dps Cat yet. The best advice I can give you to find an effective definitive starting point is to read the Druid – Cat EJ forums, and then use a tool like Mr Robot or Rawr to load your character and optimise.

Pay close attention to the discussion on Hit and Expertise requirements, as these have changed and sometimes the tools will not reflect the updates. And gem for strength (just kidding – don’t).

In an effort to respec now that we’re live in 3.0.2, here is the build that I will initially be using for my Druid, who is a cat dps role.

The huge question I have is this build gimp’ed because of the choice to still use Omen of Clarity?

Update 3: I’m tooling around with my Druid again, which means more Cat specs will be looked at and updated. Tanking has more appeal than Cat at the moment, but as a Level 75 Cat, no way I’m changing to a proper Bear spec when a hybrid feral build will do the trick.

Update 2: In light of some feedback, and general tooling around I have a new spec. Omen of Clarity is dropped out for Bersek. Still not sold on some of the differences between mine and other specs, but as yet I have not raided pve with a Cat.

Update 1:   As 3.1.1 is here, consider this spec out of date. I’m sure the basics will be ok, but I’m not claiming this is accurate anymore. Instead go have a look at Altosis’s DPS build for Cats. It has a breakdown of talents, a build link, and he’s playing Cat far more than I am.

END_OF_DOCUMENT_TOKEN_TO_BE_REPLACED

An attempt at a Shadow build for level 70s. (Edit: As 3.1 is fast approaching, consider this spec out of date. I’m sure the basics will be ok, but I’m not claiming this is accurate anymore).

I wanted the Silence ability, but need to know if it is worth sacrificing the points from other areas; at the moment its not.

Dispersion is not worth the last point in a tree as far as I can tell (Dispersion is wonderful, I was wrong), and I’m happy to be wrong later. It would be a far more affective ability if it also reduced the Threat the Priest has on the target too. Then I can see it as a great way to ramp up your damge, then take a short breather while your mana pops up 36%. That will hopefully stack with the mana return you’re normally getting and the Meditation and TV abilities. In its current form its crappy.

– no reduced threat, my gear is not putting me anywhere near threat capped and unless you’ve broken +1000 damage you won’t be either from what I can tell.

– no increased range on shadow spells, mostly in runs its ok to be far away. Only in a few fights I can think of its a real issue, and in those you just need to move like the melee dps (murmur, prince, etc).

– added back in Silence, and so happy about it. Doing the Sunwell Attack Plans against casters is easy mode with silence. I can see why people roll Blood Elves.

– Added back in Dispersion, as its proven to be a good toy and I think I’ll get real milage out of it.

Looking at the Affliction tree for Warlocks at 70, its seriously fun times. The tree has gained some potentially powerful spells, and the opportunity is present for Affl-Locks to construct strange and bizarre spell rotations. Much like the Paladin build earlier I’m taking a punt on a build. This setup was copied from a L80 setup for Afflict raiding, and I can see easily why its potent.

Edit: As 3.1 is fast approaching, consider this spec out of date. I’m sure the basics will be ok, but I’m not claiming this is accurate anymore.

END_OF_DOCUMENT_TOKEN_TO_BE_REPLACED

Wednesday night my paladin hit 70, which I’m pretty chuffed about. What made it extra sweet was flying straight away to get a flying mount. I had to save for a while to get the cash together for my warlock’s flying mount, and even longer for him to get his epic flyer.

This was not quite the same level of excitement, but certainly made the event a milestone in wow for me. White was the only real choice, as I don’t like the look of the black (unless its on a shadow priest), and the gold looks just like the normal gryphons, which is something I’m well sick of flying around on.

A player has hit the new level cap in just 28 hours. Impressive.

Its worth the read if you’re a WoW fan. If its fake then a few sites have been drawn into it.

This is a repost from my post on my Guild’s (Endeavour) forum site.

He said: “Cau (the 1st European lvl 60) and I planned the exp(erience) route step by step, trying everything to make sure it was the most appropriate, the groups organization with the guild Millenium and their members. Each member rotated using a definite order to help me to grind on mobs, mostly with AE, surrounded with several guildmate healers, tanks, pullers etc…”

Gullerbone used a tactic of ‘tagging’ computer controlled enemies, which allowed him to achieve experience points even though his guildmates killed them.

When asked how many players he had help from, he said: “Well at first we had only five (during the first 10 hours or so) so that 10 of the members could get to lvl 62. Then in the morning we were 15 in order to kill the mobs at a faster rate. Finally in the evening, everyone was involved and we could gather a 35 man raid to help me in Netherstorm with our new lvl 62 doing most of the job.”

The fact that a player has managed to reach level 70 so fast will not please developers Blizzard, who had hoped to see the Burning Crusade occupy fans for at least a year.

IMHO the fact that you can do that is not a reason for us to get upset. The real challenge will be getting through the content.