What a nice evil looking Bat! The new store purchasable mount is god damned evil looking, and a pleasure to behold. Blizzard store link for those who can’t wait and have $25 they can spend without regard for charity or child support.

I want this mount. 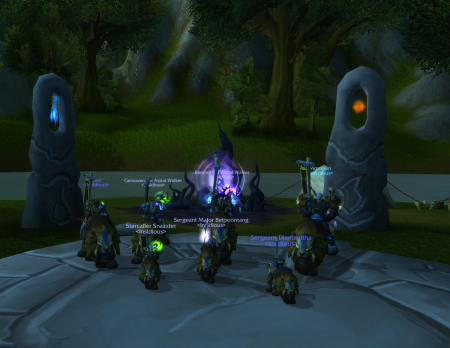 A few nights ago I led my first 25m Ulduar, and it was certainly a challenge. Raid leaders have always had my respect, and as a participant I tend to follow the instructions from the leaders even if they make little sense. You never know when somebody has a method or tweak that will change the encounters. That said – its a prick of a job.

It is a strange sensation to lead a raid rather than just do my job. Kind of like thinking in two spaces at once, the first is my normal role of melee dps killing the mobs, and the second is watching what else is going on, seeing and correcting the actions of others.

Raid leading seems like a good role to keep the game interesting. I’ve always been an advocate for knowing the roles of other classes, and understanding what powers, strategies, and potential the Tank, DPS and Healer roles use. And now I get why often raid leaders have several alts, in each of the three roles in the game.

I find in the heat of battle people stick to what they know rather than what they’re told to do in advance. That means that moving them mid fight will help, but also saying it afterward will help too. Post-wipe looks to me to be a good time to outline what we might have to do better. I think it willstick more in everyone’s heads after a small beating.

What I’ll do next time: