I shouldn’t look at DPS Rankings, as they are skewed in ways that mean they are one source of input for performance and are nothing like a perfect. That said, the recent updates from SimCraft are giving me deja vu.

I wrote about the 5.3 Dps rankings in August this year, and this post could use many of the same words. Meaning the upward geared DKs will be fighting harder to get the same dps as some other classes. Ref: http://www.noxxic.com/wow/dps-rankings/realistic#553.

This is the Ranking for ilevel 553-ish gear, and I’m uninspired by how the ilevels scale. 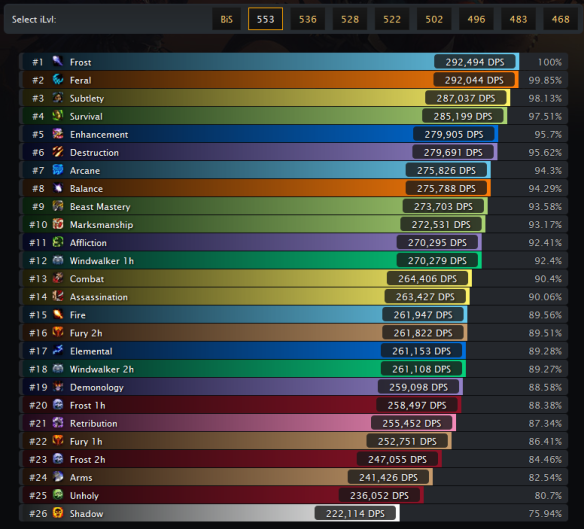 If you want a far more detailed breakdown of Dps for DKs including relative stat weightings and the value of trinkets and such according to Heroic gear vs Normal gear, with the Set bonuses then check out Destiny Softworks. The posts make a lot of sense and are a boon for DKs, e.g.:

My suggestion for going into 5.4 would be DW frost, if you have the appropriate weapons, or unholy if you have access to a significantly better 2Hder. Unholy will do quite fine, and most likely beat 2H frost, until we start getting tier items. I’ll be charging in as DW…

Have a play with the Noxxic link, and see where your class/spec is. And take it with a grain of salt as nothing makes a bigger difference than they person on the keyboard.