It is seriously weird that it might be a contentious discussion about
how many levels are in the next expansion.

Dah, what? Logically it’s about the time spent not the numerical
values. 20 hours of game-play split 10 or 5 ways should not really make
a huge deal.

The talents, rewards, items, quest difficulty should not be so
lopsided that it could be breaking if either choice was made.

If you’re in the 5s camp then perhaps we need a mod that fakes the
Ding and Grats animation to allow the trained reward response to feel
more like the 10s.

Perhaps even a mini-Ding per 10 quests completed, each which
reiterates a power you’ve recently learnt just in case you’re ignoring
that recent new talent or power up.

But perhaps there is a point or two to be made…

Scaling between different level characters had tended to rely on
levels are a lever for advantage. So if there are more breakpoint a
between current and future max level then the impact of that gap can
be spread across more points.

It also may affect the gear scaling as the levels build up. 10 levels
allows for a more granular range of item levels. I’m not sure if that
is desired or not. Might be that another item level crunch helps
smooth the curve of itemisation.

Lastly it might affect the quest Gray effect. A normal challenge at
level 99 is probably yellow, where a level 90 or 91 is gray or green
at best.

I’ve seen the new heirlooms used as the basis for the expansion having 10 levels. That ignores the fact that the heirlooms are on PTR and that they might not last two expansions. I have a huge number of heirlooms which cover base game plus many expansions already, why not more.

The video series “The Burdens of Shaohao” by Blizzard is darn excellent. I’ve not yet got back to watch it all but what I have seen so far is fantastic. Great tone in the story and beautiful animation.

It did highlight to me how much bolder and stronger looking the Emperor is in the animation vs how portly and cute the in-game character model is for the Pandaren male race. My Pandaren character makes me feel more like a silly bumbling sidekick character for comic relief instead of a powerful Monk. I think it all comes down to how portly and round they are, and it is a shame.

I think I’d prefer the Pandaren to be shaped with more upper body strength and a imposing presence then they have now. A more “Tauren” style model.

BioBreak blog reminded me today how much I loved the PC game Master of Orion 2. By today’s games it is a contradiction to all the features that generate buzz:

Why was it so good? Well for a start it supplied a backdrop for my mind to fill in the story. END_OF_DOCUMENT_TOKEN_TO_BE_REPLACED

The SoG trailer for patch 5.4 is very good, not good enough to turn me around on thinking that Garrosh’s method is all too “obvious bad-guy mode”, but enough to show that players are getting something that has had some serious effort.

Despite my sometimes critical views on aspects of the game I still think World of Warcraft offers one of the most engaging and high quality experiences of any game. The production values are still well above industry average, and this trailer again proves that a story so simple as Kill Garrosh can be made darn interesting.

Can the trinity of tank, heal, damage roles in online rpg games be removed? Really?

An old question, and perhaps one which is both too subjective for each game style in question, and also blisteringly obvious for MMOs. Blessing of Kings has a great post where the discussion thread is the perfect primer for the issues and the potential degrees of how effective the solutions will be. A darn good read.

To me it is all about degrees of effectiveness vs the suspension of disbelief. No solution I’ve ever read provided a summary for an MMORPG that has no role based system, without a set of quasi-magical powers to manipulate the monster’s behaviour. And that is not what might really happen.

If nine of my friends and I decided to attack a giant, I don’t think the giant would understand taunts enough to only swing at one person, or that two of us were good at recovering from wounds so might be better to kill early. The giant is going to kill easy targets, targets that hurt it a lot, and then the rest of us.

Similarly a grizzly bear will attack one of us until it can get a good meal, unless we keep poking it with spears in which case it will hurt the spear carrier and probably ignore any others just standing to the side waving their hands (healing, caster dps).

In MMORPGs I don’t think it can be totally removed. I don’t think I’d want it removed either. We have a method which is essentially in support of the fun, and while the mechanics of that illusion might be tweaked, the illusion is useful.

A note from a little while ago indicates that there will be a Legendary catch-up coming in Patch 5.4. This is good and bad, and the divide in opinion seems very polar.

Good for those who are interested in getting the item, and who struggled to keep up. Great for new 90s, or for players with Alts. Incredible for them. I know many players personally who will frigg’n love the fact that they won’t be returning to old content just for the quest drops. 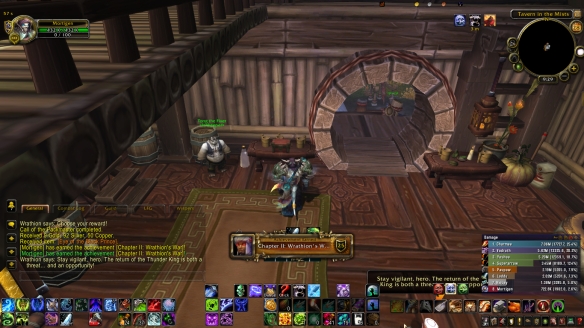 Bad for players who wished this Legendary to be as unique as the others. They want it to be hard. As a direct comment in the post says:

So basically what this means is, those of us that keep up with the chain as parts are introduced are wasting time that could be used to do other things, because all we have to do is wait a patch or 2 and we can make up months of  grinding in a cpl weeks… Cut the shit!!! IT’S A LEGENDARY, not every hockey helmet that pays $15/mo is entitled to it just because they pay for game time… This is something thats supposed to be exclusive, treat it as such and keep it harder to aquire then getting a new heartstone…

Overall if it were my choice I’d have said no to the concept, but the actual mechanic in this case still requires significant grinding, and will not make that much of a difference in terms of time investment. Sure, it took me 3+ months of hard work to get here, but that is ok when the hard work is still needed. This is less of a nurf to effort than when the Valor points were dropped.

So I think Blizzard have done a good job of allowing players to raid (what will be) the current content, but also slowly gain ground on the quest chain. The drop rate seems to be the same, the kill rate, etc all should leave the player doing the same activity, just in a harder and current raid. Once the Legendary was presented as an Orange-Toy-for-Everyone this type of grand fest was really the only course of action.

I went digging for relative DPS performance of each class and spec. Why? Well I heard grumblings that Boomkins were shitty dps in patch 5.3, and Mages were getting nurfed. Apparently Shadow Priests were doing poorly too. I did not want to accept that on face value, so had to dig.

As a DK what I found made be bloody angry. It seems that the rough simulations performed by the SimulationCraft app for both “ideal” and “realistic” conditions have Death Knights as the lowest dps regardless of their spec choice.

Yup, that means all the banter normally seen between which playstyle is performing better is basically moot when you consider that any choice a DK makes can be out performed by every other class. END_OF_DOCUMENT_TOKEN_TO_BE_REPLACED

You know how happy those kids look when they’re bouncing away on the merry-go-round horses? Jumping, screaming, drooling, and yelling in excited glee as the poor inanimate horse-seat just goes around in circles…

.. I’m that horse at the moment. Real life distractions are keeping me well out of game to the point where I’ve not capped on valor (hateful), not collecting coins for extra rolls (dastardly), and even not finding time to DE my junky green loot (lazy sod).

So with a dearth of activity comes an absence of posts.The guild continues to progress in Heroic modes, and the members seem to be getting along famously well. It is pleasing to watch from this side of the monitor. With patch 5.4 dropping later rather than sooner it helps us, especially if it drops in mid September (my total guess) rather than late August.

There will be more soon, as the merry go around is scheduled to end after August, and I’ll be unshackling myself from the merry-go-round and launching into the game.