One of the Insidious regulars is a great guy nicknamed Pepsi, and he’s the wonderful guy who always brings the feasts. Last week he must have had a few spare… 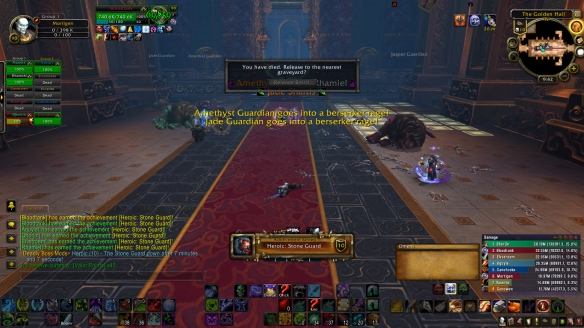 Great looking mod for Skyrim which creates the WoW instance of Scholomance. It shows what a non-cartoon style of game might look like. Very darn appealing. 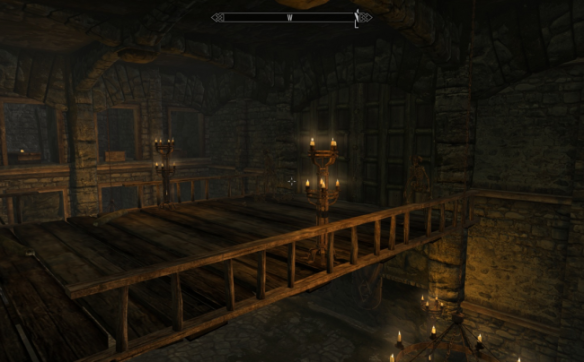 Cartoon style allows forgiveness for a huge range of visual issues, including a place not looking correctly fitted out with junk, details on surfaces, and all the other illusions that a human can detect, but need to be “designed by hand”. Probably relates to that old Uncanny Valley concept.

The image above looks like the entry bridge for Scholomance. Have a view of the rest on the link Steam Workshop: Scholomance. END_OF_DOCUMENT_TOKEN_TO_BE_REPLACED

The raid team are not resting after finally killing the Sha of Fear (getting the Guild to 16/16 Normal), and last night we were successful in killing the Stone Guardians of Mogu’shan Vaults on Heroic.

It is a tough fight for the healers, especially if the team are not coordinated. That said, a few of the raiders really knew what they were doing, as it looked to be a wipe, but the living players continued to fight, killing the dogs just as it enraged. If one of the 4 dead folks had lived a little longer (myself included) then we’d have probably not even hit the enrage. Any kill is a good kill when its the first.

The shorthand description of T14 H1/16 never looked so good. Screenies will go up later.

So this for DKs:

– You now maintain the same percentage of health when you switch into and out of Blood Presence
– Strangulate (but not Asphyxiate) is off the GCD.

Means that I missed a great exploit? Damn it! (heh) END_OF_DOCUMENT_TOKEN_TO_BE_REPLACED

Some thoughts on what is now old news…

Valor points are not being reset (huzzah) to Justice points, and patch is set for 5.2 If you’re able to spend and then earn the valor for an upgrade it is still worth it, just don’t upgrade an item you’ll replace early (trinket, ring, etc) once you get into the new Reps. I shot a stack of Justice points on a basically useless heirloom item for a Shaman, because I have little else to purchase with them. Justice are pretty dull at the moment once you’re past a gear level. That is ok in the most part, but it would be nice to do something good with them.

In 5.2 we get new reps to grind out, new gear to loath the drop rate for, and new dailies to make the drop rate seem a secondary concern. Less yay, but something to get into.

New raids look good, in a way that is a new visual presentation (cybernetic aztec dinosaurs with lasers…..roar) and also a new set of mechanical challenges. Good news. Lore/RP wise it will be an interesting patch if only because we get closer to finding out why Garrosh goes bananas and why Jania does not follow suit and smash a few cities. I know she’s taken the road less traveled, but Garrosh is going to need to do some more shitty things before the rest of the horde will use him as an end-boss. He’s been an unmitigated arse so far and the horde racial leadership are happy with that. Well the ones who are alive are anyway.

Oh, and Wrathion! He continues to give the heroes gifts and boons, as we continue to follow his agenda. I feel that either he’s a major player i the end of this expansion, or the major NPC in the next expansion. It would be great to see a character transverse the expansions so that during Mists he helps and rewards, and then in the next expansion we see what and why he did particular things. I can’t help but think his goal is to restore the Black Dragon flight, and that might be brilliant or could be a total disaster for the players. It would be especially good if Wrathion is actually a creature of leadership, but not a “corrupted bad guy”. Sure his view might be different, and lets see him as a leader for the future stepping into the empty shoes of the other flights now that they have left.

The season 13 pvp gear for Death Knights looks nice, particularly the shoulders. The help is less so, but overall ok. The Shaman set is great, and stinks of a HP Lovecraft touch. Creepy Shamans.

This post is brought to you by the word: Random.

I was going to whine about loot in LFR, as a run through Terrace and the first part of Heart of Fear saw nothing. But then I got lucky in the second part of Heart of Fear LFR, and got the Gloves token which I’ve now had drop 4x times. Arrrrg. No weapons, side grades, other drops for ages. Oh, working as intended? Random rewards are fun. /sarcastic

On an actual positive note I have now handed in and completed the first stage of Wrathion’s quest-line for the “Ordinary Legendary Gem“. Now the slow grind up to 6000 Valor points has started, and we’ll see how far behind the curve I am. I doubt patch 5.2 is 6-7 weeks away given the news and press flying around.

I love the fact that the Legendary quest line is a pain in the arse and bloody difficult for a casual player. Blizzard got this right. it should be driving those players crazy, and should not be something that we feel is deserved; earn it. I get a good quest line and the promise of more great stuff to come.

My Death Knight could really use a Sha Touched weapon for Tanking. Really, really, handy. Random and hard for LFR upgrades is poor, random and hard in a Legendary quest is perfect. Its like the two are the same now. Just saying.

WoW’s Patch 5.2 will convert Valor to Justice points, just like all other major content patches. However this time the gear to be purchased will not be moving to JPs, instead it will be “greatly discounted” but still require VPs to purchase. So if you still wanted to purchase it you’ll need to farm VPs to replace the ones that were converted.

Seems like a silly idea to me, and I cannot think of a reason why making the “old gear” purchasable for JP is unreasonable. Just like previous patches. Oh, unless it takes more time to gear up an alt, then it makes sense. Shafted. The counterpoint is that the new VP gear will be what you’re buying, but then it still does not make sense not to move the old stuff to Justice.

Perhaps Blizzard is reading…they’re adding a Grand Commendation UI element in patch 5.2; which was a pretty obvious thing to add, but I’d like to brag that I called in in December.

Excellent. A small tweak for better quality of life.

Years ago the wow community were rousing about the token system was ok, but fundamentally flawed. The mini-game we play after the boss dies is another treadmill-merry-go-round where gear drops which is useless. As a design principle wow’s reward for effort is based upon re-trying the kills each week until you get lucky. Today I’m bloody mad about this as its been far too long that we’ve been suffering this. Rant incoming.

In our guild forums I wrote this class tokens:

On the token (issue) I think we’re screwed for two reasons: we need to take what we can in terms of characters who are able to join and raid above their match on the token, and we can’t get people to switch characters just to suit the bloody token system each major content patch. It is a bullshit scenario to be in, but I can’t think of a solution that does not have the regular raiders re-rolling each patch.

The token system was an ok idea to allow a boss to drop loot which would not be fraught with drama, as only a few classes could use it. Less people = less drama right? Wrong.

We have in guild now is one character with a token to himself, and half the raid split on each of the other two. Ah shit, gear drama. And I don’t mean people being bitches about loot, I mean that we see Tokens getting cycled for gold/de as we’ve had too many of one type and miles from enough of others. The drama is that our progression is slowed due to shitty luck. A boss dies but the drop is totally pointless.

Also with 4-5 players on each 2 tokens it takes huge amounts of time to gear those 9 players. It is not just 9 kills job done, because we have alt sets, and subs who join from time to time to help with the roster, which makes the distribution ever worse.

Just bring more people to suit the tokens? The server populations are shrinking and this is a totally non-viable response.

Bring the player not the class? Nope. Bring a balance of classes for the tokens. Oh and the tokens change each major content patch. Arrrg.

Reroll? Good god, have you seen how unfriendly the alts are? Forget that as viable for everyone except those with huge amounts of time to play.

The outcome is our raid group just has to suck it up, and keep grinding.

Honestly I am so sick of the loot rewards or issues around loot getting in the way of actually having fun with my raid team in World of Warcraft.

Fark this, I’m soon going to play something else. If Blizzard need a reason why I’ve moved to month-on month payments now, and will shortly consider reading a book instead of logging in they can start with this. Fark it. Destroy it all.

(p.s. what about suggestions for alternatives? Nope, I’ve done that for years suggesting ways that progressive “coins” or currency could be acquired each kill. Do a search on Gear on the blog… they’ll be a few.)

Have a read of: Do MMOs Make You Feel Old? by We Fly Spitfires.

Granted, like any good addict, I started young. But there can be little doubt that we’re seeing an emergence of new gamers in all aspects of video gaming society. Perhaps as I primarily play MMOs, I notice it more there. Trends are changing, customs are altering and social interaction is slowly creeping further away every year from what I was used to be familiar with. Gameplay mechanics are altering too. Back in November I wrote about the mechanics of combat in MMO and how in a few short years it went from ‘auto attack and gossip’ to ‘hammering keys and silence’.

Matticus has a really nice post from a while back about the raid mechanics in encounters which frustrated or challenged us. (ref: 13 Punishing Raid Mechanics Which Made You Go “PICK ME PLEASE!” | World of Matticus). He points out 13 which deserve attention.

There seemed to be more gimmick / click challenges in raids in Cataclysm than other expansions, and thankfully the raid content I’ve seen so far in Pandaria does not have many of these gimmicks. Feng the Accursed is the exception who has a special clicky-action-fun-time-button.

To be clear I think a fight mechanic is a gimmick when it is not logical in the setting or story. It might be shallow but if the mechanic makes lore sense then it is far easier for me to integrate into my understanding of the fight, and therefore defeat. There are great, poor, and average special mechanics in the game, so here are a few I thought to note. END_OF_DOCUMENT_TOKEN_TO_BE_REPLACED