I had the pleasure of smashing Garalon last night in Heart of Fear, playing 10 man Normal mode with the guild. Here is the kill screenie I took with the other Insidious folks. 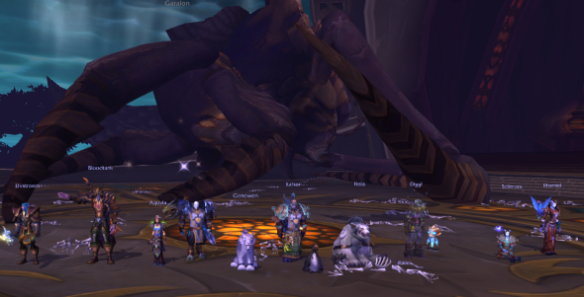 The wonderful thing about last night was the fact that we stayed at it, and it was one of the classic kills.

We all survived to kill him, and then all died just after the boss (he enraged, but we killed him in 7:05m), we kept at it beyond the official end time of the raid (which caused much aggro and enraging offline), and many folks were tempted to change strat after each attempt (which evoked in me the “shut up and pull” twitch).

Our top DPS did 105k dps (this particular Warrior is a dps bamix, just insert squishies), with the next three characters doing 90k or higher as well; with all dps having 97-98% up time on the boss. For a fight where you switch targets that is pretty healthy!

On a DK note – my self healing abilities did about 2% healing (or approx 1,526,635 health) which shows just how important self healing abilities are in that fight. On the early attempts I was not self healing as much, as it is a Dps loss to use some of the more efficient heals, but in combination with damage resistance cool-downs (Icebound Fort, you’re a wonderful toy) I think the extra effort really helps keep everyone alive. The less healing I need the more healing that somebody else takes.

The counter to that was the 7.1 million Health healing that I needed over the fight, which was about average across the team (massive crush in the logs fusks the ratios, so has to be ignored)

For Raid Progression it makes us MV 6/6, and 3/6 in HoF – and 20th on the server (although 18th if you go 10 man strict – how ever the bloody hell logic). Apparently the next boss is far easier, or so the raid lead promises.

When he’s not dead due to how awesome our raiders are the big fat bug looks like something out of a sci-fi film.

Ps. The comment about changing stats wasn’t a snarky shot at anyone in the team, it’s my own OCD.