I think we are a while away from seeing Patch 3.1. My attempts to login have so far resulted in a reliable crash. Might be mac related, might be ping, might eve be that Saturn is rising and I have not said “5 hail-blizzards” each morning. I know that many folks are in and testing, and I’m jealous of those guys.

Two things I wanted to see first hand on the PTR were the dual specs, and also how the new wardrobe mod would be incorporated. The dual specs was so that I could comment on the real implementation of these, without just re-posting general information. With all the speculation and changes in this update, particularly for Frost DKs, its a bitch to not be able to see if first hand Likewise the outfit mod. 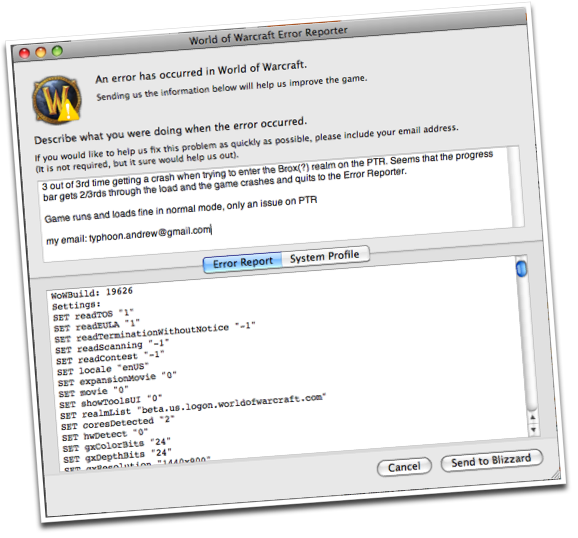 The plan for now is to report the bug, and keep trying as the days pass. Its doubly frustrating that it fails too, as even the bug reporter does not work 100% of the time. Yet wow itself is ok.

Oh well, back to wow I guess.

Update: upon trying to report the bug: