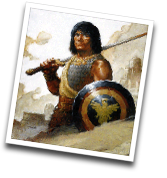 Age of Conan has a few mate of mine pretty excited, and I’ll admit to be pretty interested too. WoW still has me pretty hooked, and there are things that are still worth doing, but a new game has a shiny appeal that I expect a lot of WoW players won’t be able to resist (at least trying). The buzz in the forums that I’ve been reading is that Conan is the “next gen” of MMORPG game in terms of the graphics presentation; but is not such a radical step away from the tried and true model used by WoW and others.

I went digging for comments about the game and what’s odd is that the range of opinions in reviews from horrible to awesome. Normally I’d treat the extreme versions of any review with scepticism, it seems that there are no moderate opinions around about Age of Conan.

So what do you do? Well suit yourself, but I’m waiting to see more before spending the money.

Keep an eye on the reviews, buy game magazine a few weeks from now, and watch the flame-wars until a general good review with detail is written. I’m also keen to see what the regular wow guys think when they login; as that will be a good measure of what the game offers.

I also noticed that the it was darn hard yesterday to find a trial download. That could mean that either its unavailable while they launch, which would be fair to the paid players; or that a demo version might not be available. If there is no demo then its another reason to stay with what I know for longer.

Conan delayed for Australians. Berlin Wall (and most other game retailers) have announced that Age of Conan has been delayed, only by a few days. Read the announcement for yourself.

Unfortunately the Australian distributors have just informed us that Age of Conan: Hyborian Adventures, including limited editions and timecards, has encountered a shipping dispatch delay and will be late coming into Australia.

This means the originally announced Release Date of Friday 23rd of May will likely be pushed back to either the next Monday 26th or Tuesday 27th of May. We are doing everything we can on our end to get stock to our store as fast as possible but unfortunately we have been informed that the Australian vendor, Atari, will not have stock in the country until Friday the 23rd of May meaning stock won’t arrive in-store until Monday the 26th at the earliest.

As of our last check with the Australian distributors, pre-order keys are still available for those players who order now entitling them to extra in-game content (War Rhino mount once at a certain level in-game and a Rhino Traveller’s Bag (8 Inventory Slots)) as well as the potential opportunity (places are limited) to purchase a place in the “Early Access” play program.

For the die hards this is a blow which might be seen as a bad thing, and then consider if a few days is not too much to wait. Its not like you’re going to be 20 levels behind on day 3.